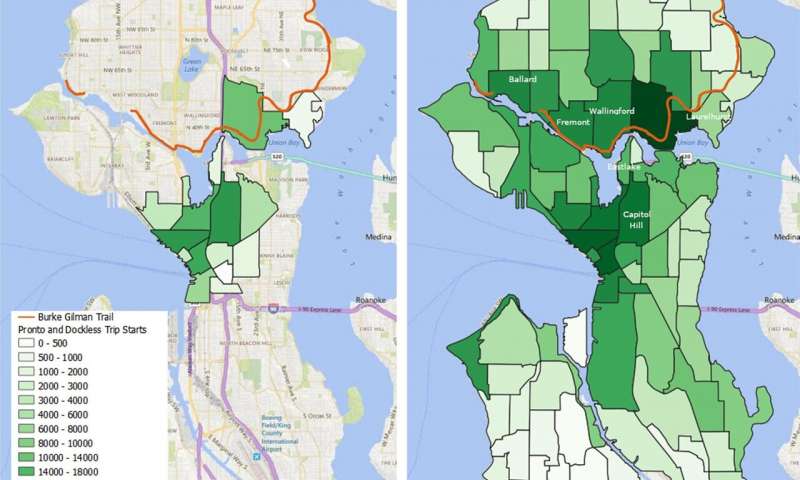 
In October 2014, Seattle launched Pronto, a docked bike-share program. But Pronto had problems shifting into a higher gear, and the city ended the program in 2017, making Seattle one of the few cities in the world to shut down a modern public bike sharing system.

Then, four months later, Seattle became the first city in the U.S. to allow for dockless bike sharing, a system where bikes don’t have to be picked up or returned to specific docking stations.

University of Washington transportation researchers took this opportunity to look into why Pronto failed while dockless bike sharing has been so successful. The researchers used multiple approaches to consider 11 possible factors behind the difference in bike sharing outcomes: They surveyed Seattle bike riders, read press reports, analyzed ridership data and interviewed experts involved in both Pronto and dockless bike sharing in Seattle.

The team published its results Sept. 26 in the journal Transportation Research Part A: Policy and Practice.

“We wanted to know if the problems Pronto had were intrinsic to Seattle, like our wet weather, our hills or our helmet laws. Or if they reflected decisions made by the bike sharing system designers—like the price of a ride or bike location and density across the city,” said senior author Don MacKenzie, a UW associate professor of civil and environmental engineering who also leads the leads the UW’s Sustainable Transportation Lab.

Some of the findings include:

Pronto bikes weren’t always in areas that people wanted to go. Many neighborhoods that have high dockless ridership—Alki Point, Ballard, Wallingford, etc.—did not have Pronto docking stations. Pronto had a smaller number of bikes per square mile. It launched with 500 bikes—50 stations—spread over 5 square miles. Dockless bike sharing launched with 1,000 bikes spread over Seattle’s 84 square miles. By the end of the first year, there were 9,000 dockless bikes, owned by three private companies, across the city. Pronto was perceived as “moderately difficult” to use, whereas dockless bikes were perceived as easy to use. For example, Pronto users had to go through multiple steps at the docking station—selecting a bike, renting a helmet, paying by credit card—to check out a bike whereas dockless bike users open their app, scan a QR code on a bike and start their trip. Pronto was more expensive—$8 per day with no per-ride option—compared to dockless bikes, at about $1 per ride.

To the team, the success of the dockless bike-share programs isn’t necessarily due to the fact that they are dockless, but rather the fact that these bikes had a higher density throughout the city and were more accessible for new users.

Dockless bikes, however, do have some advantages over their docked cousins: They can be dropped off anywhere, their set-up cost is likely to be about 80% cheaper than docked bikes, and companies can move them around the city based on how people are using them.

“These results can help service providers and cities better design and regulate bike- or scooter-sharing systems to increase ridership,” MacKenzie said. “One of the main implications from our study is that service providers should deploy at scale. A system that covers a large area and has plenty of bikes—or stations—is a system that will provide the greatest utility to travelers, and will achieve the highest ridership. For jurisdictions that aren’t ready to commit to a permanent, large-scale deployment, dockless may have an advantage for a temporary deployment because it doesn’t require costly investments in docks. Finally, policymakers should ensure that shared bikes or scooters can be picked up and dropped off in the places people want to travel.”