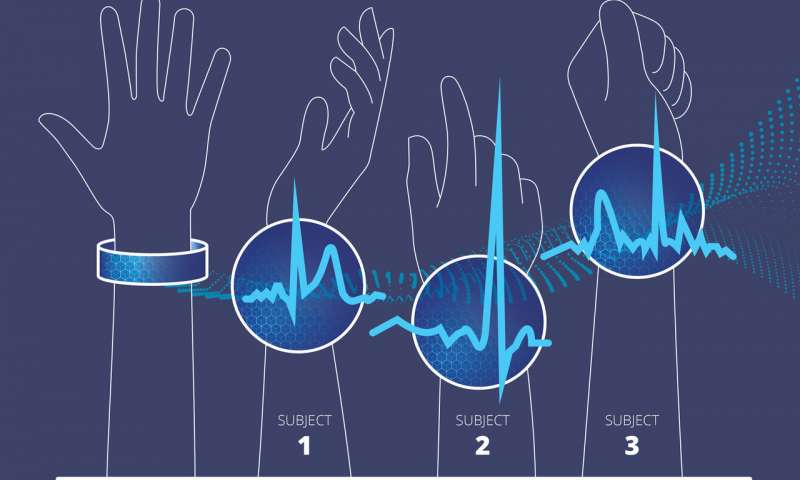 
A thumbprint to unlock a door. An eye scan to unlatch a vault. Both were once ideas of the future that may become things of the past if current research is successful.

Sandia National Laboratories is collaborating with a New Mexico small business to test and develop a biometric security system based on the human heartbeat. Sandia signed a Cooperative Research and Development Agreement with Albuquerque-based Aquila Inc. to develop and test a wearable prototype that can stream in real time an identifying signature based on the electrical activity of a person’s heart.

Sandia brings to the CRADA, signed in July, “the expertise in security systems and testing facilities that will allow us to emulate real-world characteristics to test access-control prototypes,” Sandia engineer Steven Horowitz said. “We have expertise in the types of specialized facilities this could be used in.”

In addition to sharing Sandia’s expertise in testing new technology, the CRADA has the added value of pairing a New Mexico small business with the national lab.

“Any opportunity Sandia has to work with a local small business such as Aquila not only has palpable economic impact but brings a new perspective and energy to the core mission of the labs,” Sandia CRADA specialist Jason Martinez said.

Aquila and Sandia will jointly assess the form the wearable may take, such as a wristband or chest strap. It would be an alternative to such things as fingerprints and eye scans when those access-control methods might be limited, such as in a laboratory where gloves or eye protection may be necessary.

Aquila’s wearable plans to use software developed by U.K.-based B-Secur that enables a heart rate and other wellness indicators to be streamed in real time.

“B-Secur’s HeartKey includes the ability to identify and authenticate an individual from their unique electrocardiogram signature,” said Steve Kadner, Aquila’s executive vice president. “The objective for the new system is to meet or exceed the current fingerprint or iris readers for access control and position tracking purposes both operationally and economically.”

An electrocardiogram is a record of the heart’s electrical activity during a heartbeat. The are several different measurable features, which together produce an individual signature.

The technology recognizes the wearer’s individual electrocardiogram signature and transmits a signal allowing the user access to a specific location, Horowitz said. The initial tests would be to see how the wearable communicates with access-control architecture, and additionally if it could effectively track a person’s movement within a facility.

Such function could be useful for Sandia and its national security mission as well as other industries, including hospitals, according to those involved in the research. The CRADA’s content and direction was born from similar biometric security concepts Sandia has worked on and tested in the past, and from research Aquila was conducting. The new agreement aims to build on the previous research and take it to a higher technological readiness level.

“Sandia will draw upon its subject-matter expertise in access control to evaluate the performance of the system in scenarios similar to those in potentially applicable facilities,” Horowitz said. Sandia has particular expertise with systems where enhanced physical security and access control are necessary for domestic and international threat-reduction initiatives.

Under the terms of the CRADA, Sandia and Aquila expect to complete the development and testing of the prototype in a year.