The LEGO Icons (10300) Back to the Future Time Machine Set lets fans recreate vehicles from either the the first, second or third movie, and you can get it for $169.99 shipped, today only, originally $199.99. You also get a light-up flux capacitor, a box of plutonium, the infamous hoverboard and LEGO minifigure versions of Doc Brown as well as Marty McFly. Product page. 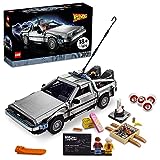 Other details include wheels that you can fold down for flight mode, printed dashboard dates, opening gull-wing doors / hood and many more Easter eggs such as swappable license plates. There’s even an included banana and tin can to power the Mr. Fusion device as seen on the DeLorean at the end of the first movie.

Universal, Amblin Entertainment and the Back to the Future filmmakers are delighted to have partnered with the LEGO team in the creation of this fantastic kit. In the movie, Doc Brown spent almost 30 years and his entire family fortune to build his Time Machine. Fortunately, you’ll be able to build this LEGO model in significantly less time and with far less expense,” said Bob Gale, co-writer and co-producer of the trilogy.