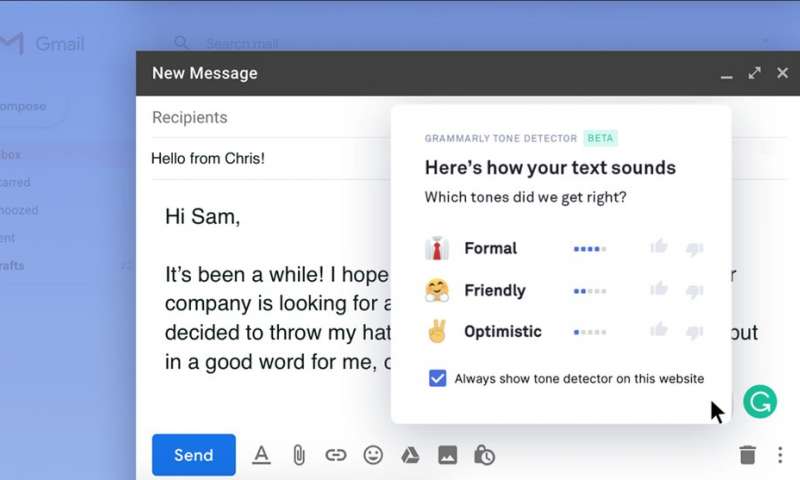 
Emotions are hard to convey via text.

And studies suggest that even when you think you’re being clear, the person on the receiving end might have other ideas. Well, artificial intelligence and online tools can help.

In an era when emoji are entering workplaces and acronyms are replacing words, you no longer have to fly blindly when trying to decipher an email or text. That’s because AI-powered text analysis tools have popped up online, offering software that data-mines content to read between the lines.

For example, the grammar-editing company Grammarly is expanding a feature to ensure that your writing conveys the tone you intend.

Called Tone Detector, the tool will encourage you to consider rephrasing an email when your intended message may get lost on the reader. It will tell you how your message may sound to the person you’re sending it to.

The tool can detect 40 different tones including appreciative, confident, disapproving informal, loving, sad, thoughtful and worried, Grammarly says. If you’re sending an email to congratulate a friend on finishing a big project, the computer learning tool could flag your message as appearing excited and joyful.

“But if those same tones are detected in a piece of communication where they might be less appropriate (for instance, in a resignation letter), you can take the opportunity to dial back what you wrote and steer it in a different direction,” Grammarly said in a press release.

A beta version of the tone detecting service is currently available in Grammarly’s Chrome browser extension. It will work on email sites like Gmail and Yahoo.

Grammarly isn’t the first to create software that detects the tone of your email.

IBM introduced its instant Tone Analyzer in 2015. The tool uses cloud-based linguistic analysis to tell if an email, blog post or text message is actually as angry, assertive, happy or sad as you intended.

And the website ToneDetector.com launched an Outlook add-on in 2016 that determines the emotion of an email as you type in real-time.

Tools like these could actually be useful since studies show people aren’t as effective at conveying emotion via text as the think they are. A study published by the American Psychological Association used five experiments to explore how bad people are at communicating over e-mail.

“Because e-mail communicators ‘hear’ a statement differently depending on whether they intend to be, say, sarcastic or funny, it can be difficult to appreciate that their electronic audience may not,” the study found.