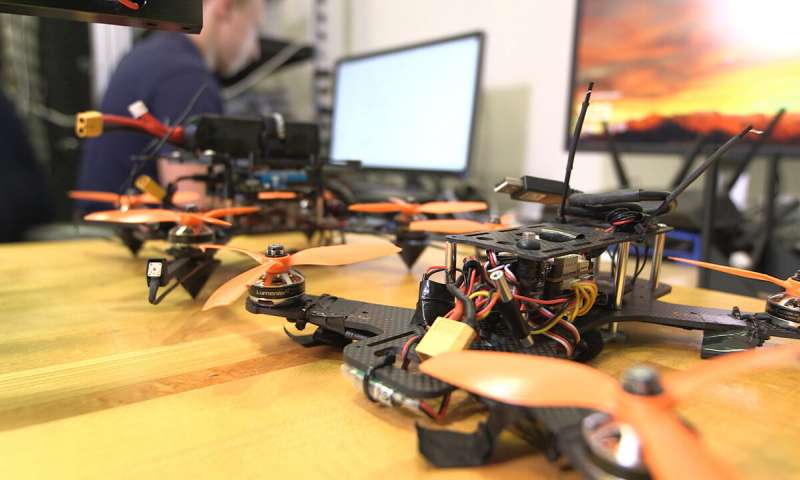 
Sandia National Laboratories is developing autonomy and artificial intelligence for flight systems soaring at more than 3,800 mph. The technologies to get there will initially be tested on drones that shuffle around at about 5 mph.

A team of college interns at Sandia National Laboratories contributed to the hypersonic goal this summer by completing the first two drones the labs will use to try out new algorithms for autonomous navigation, guidance and control, and target recognition.

Each drone—a quadcopter and a hexacopter—passed a final flight test before students returned to school for the fall semester. The vehicles demonstrated an ability to position themselves, update their position coordinates and recognize and land on a target.

Vehicles designed for a variety of experiments

These drones are built for flexibility. Users upload and update algorithms remotely, in a variety of programming languages, over a Wi-Fi connection. A USB camera can be popped out and replaced to experiment with different sensors.

Each vehicle is equipped with two onboard computers—a smaller one that controls the rotors and a more powerful one that processes visual information from the camera. Both computers, however, had strict size and weight constraints to keep the drones light enough to fly. This limitation challenged the team to come up with efficient programing strategies.

“The algorithm has to be able to run fast enough to give usable results,” said Sandia scientist Logan Wright, who served as an adviser to the team. “An obstacle detection algorithm isn’t very useful if it detects an obstacle after you’ve already run into it.”

The group tested their vision algorithms by walking through a test space with a camera, taking pictures. They uploaded the pictures to the drones along with an algorithm to assemble the images into a 3-D map. Then, the team sent instructions to the drones to move to specific coordinates. The drones oriented themselves by comparing what they saw through their cameras with their internal maps and then flew to the correct spots.

Hypersonic vehicles fly miles above the ground, so engineers have enormous creative latitude when developing and programming vehicles for open skies. But this freedom can also be a challenge.

To build the drones and create the algorithms, students pooled diverse experience levels and backgrounds, ranging from aerospace engineering to computer engineering and machine learning.

“My main wheelhouse is probably in mechanical design,” said Jared Li, a member of the team and a graduate student at Georgia Institute of Technology in Atlanta, Georgia. “That’s what I’ve worked on in multiple jobs in the past, but it’s never let me actually expand my skill set or learn something new or even be excited about what I’m doing. But here, it’s different. And I like that a lot.”