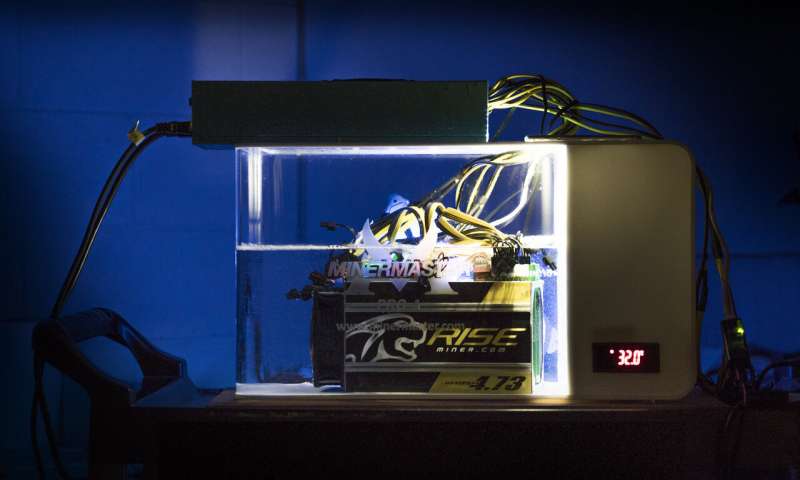 An Antminer S7, a type of application-specific integrated circuit built specifically to “mine” cryptocurrency. In the exhibit on display in Anneberg Forum through May 2020, it’s mining Auroracoin, the unofficial cryptocurrency of Iceland. In a little more than a month, it has collected 123 Auroracoins, equaling about $3.16. But it costs $2 per day for the electricity to run it. Credit: Kyle Cassidy


Imagine a hairdryer running on high, continuously, for 24 hours a day, seven days a week. The energy it drains—about 40 kilowatts per hour—equals what one extremely powerful specialized computer uses to mine cryptocurrency. A single six-building data center outside a small town in northern Iceland houses nearly 30,000 of these machines.

“That town of about 900 people, called Blönduós, uses about 1,500 kilowatts of energy per hour, on average. The data center uses 32,000,” says Zane Griffin Talley Cooper, a doctoral student in Penn’s Annenberg School for Communication. “That data center also has its own dedicated connection to the nearby hydroelectric power plant, which itself is growing in anticipation of industrial expansion into northern Iceland.”

On its face, Iceland seems an ideal setting for the fast-growing cryptocurrency industry. The country uses 100 percent renewable energy that’s relatively cheap to access. Its climate acts as a natural coolant for continuously running machines that heat up quickly. And to date, the political environment there has mostly welcomed this industry.

But despite those facts, Cooper has questions, not about what cryptocurrency is or does, but about what it requires. “How does it work on the ground?” he asks. “What must be in place for cryptocurrency to happen in a given setting and what about the people involved in building and maintaining the system?”

A multimodal exhibit Cooper created with Annenberg technologist Kyle Cassidy and doctoral student Katie Gressitt-Diaz of Rutgers aims to answer some of these questions through a virtual reality (VR) documentary film, a photo series, and conceptual sound work. It also brings people face to face with a fully operational cryptocurrency mining machine, called an application-specific integrated circuit or ASIC. The intent of the exhibit, on display in the Annenberg Forum through May 2020, is to convey an ethnographic exploration of cryptocurrency and blockchain in Iceland and to spur thinking and conversation about their energy use.

Without understanding the nuts and bolts of cryptocurrency, the subject can seem, well, cryptic. Part of the confusion, according to Cooper, is the word “mining” attached to it. “It’s not something that already exists that you find,” he says. Rather, it’s a sort of transaction-verification process and subsequent reward for that authentication, in the form of a finite number of untraceable electronic coins.

Cassidy likens it to a ledger book. “All of the people who are mining cryptocurrency, they’re watching that ledger and making sure no fraudulent entries are put in. At intervals decided by each currency’s creator—and there are thousands of cryptocurrencies—a coin is generated and given to one of those people as a reward.” A verified transaction then typically gets added to a block, which joins other blocks to form a chain known as the blockchain. “The blockchain is the history of all transactions on that particular network, ever,” Cooper explains. “And, in theory, it can’t be erased.”

The verification process itself is complicated. It requires generating a very particular number that, when added to the data already in the block, produces just the right number of zeros in a row, something impossible for humans to solve. That means the more computing power, the better. When Bitcoin, the first cryptocurrency, came on the scene in 2009, nearly anyone could verify transactions on a regular old laptop. But as more coins started to circulate, meaning more puzzles to solve, that soon wasn’t enough computing power.

“People moved to desktops, then to graphics cards, stringing them together,” Cooper says. “Then that wasn’t enough, so companies started creating what’s essentially a motherboard built for a single purpose, to mine Bitcoin. It used to be that you could make a profit with just one, but all of a sudden, four wasn’t enough. You had to get seven, 10. Then you had mining pools, where people would link a bunch of machines together in the hopes of getting pieces of a coin. These mining pools grew, and then large data centers started being built, first in China, then in other places—like Iceland.”

For the past year, Cooper has been thinking about cryptocurrency in Iceland within the broader context of his research, which focuses on how our digital world depends heavily on what he describes as “regimes of resource extraction and energy production.” In fall 2018, he started contemplating a trip to experience and document how Iceland’s natural resources move from the earth to the ASICs, and who is involved in that process. He asked Cassidy to come take pictures and enlisted Gressitt-Diaz, who studies sonic representation in media at Rutgers, to construct conceptual sound pieces, do field recording, and design an audio mix for the documentary.

In 2019, the trio visited Iceland twice, once in March, a second time in July. They met with blockchain and cryptocurrency industry insiders, environmental activists, two members of the Icelandic parliament, and several people in the energy industry. They toured a geothermal energy facility and a data center.