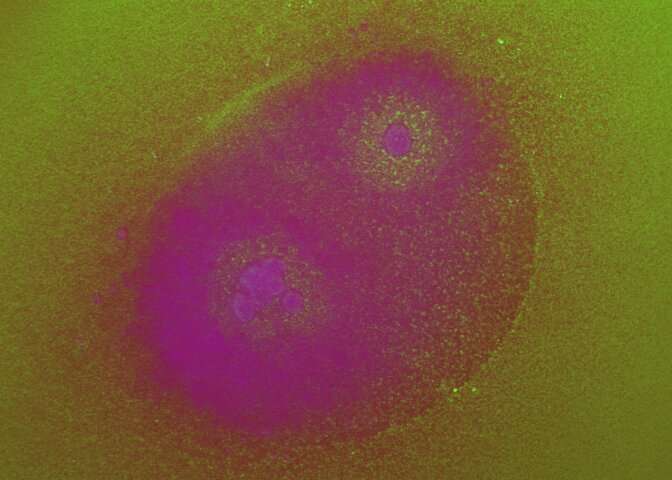 Two bacterial colonies that have formed purple rings because of the gene drive that researchers have implanted in them. A new machine learning model greatly speeds up this science by predicting the interaction of dozens of biological variables. Credit: Lingchong You, Duke University


Biomedical engineers at Duke University have devised a machine learning approach to modeling the interactions between complex variables in engineered bacteria that would otherwise be too cumbersome to predict. Their algorithms are generalizable to many kinds of biological systems.

In the new study, the researchers trained a neural network to predict the circular patterns that would be created by a biological circuit embedded into a bacterial culture. The system worked 30,000 times faster than the existing computational model.

To further improve accuracy, the team devised a method for retraining the machine learning model multiple times to compare their answers. Then they used it to solve a second biological system that is computationally demanding in a different way, showing the algorithm can work for disparate challenges.

The results appear online on September 25 in the journal Nature Communications.

“This work was inspired by Google showing that neural networks could learn to beat a human in the board game Go,” said Lingchong You, professor of biomedical engineering at Duke.

“Even though the game has simple rules, there are far too many possibilities for a computer to calculate the best next option deterministically,” You said. “I wondered if such an approach could be useful in coping with certain aspects of biological complexity confronting us.”

The challenge facing You and his postdoctoral associate Shangying Wang was determining what set of parameters could produce a specific pattern in a bacteria culture following an engineered gene circuit.